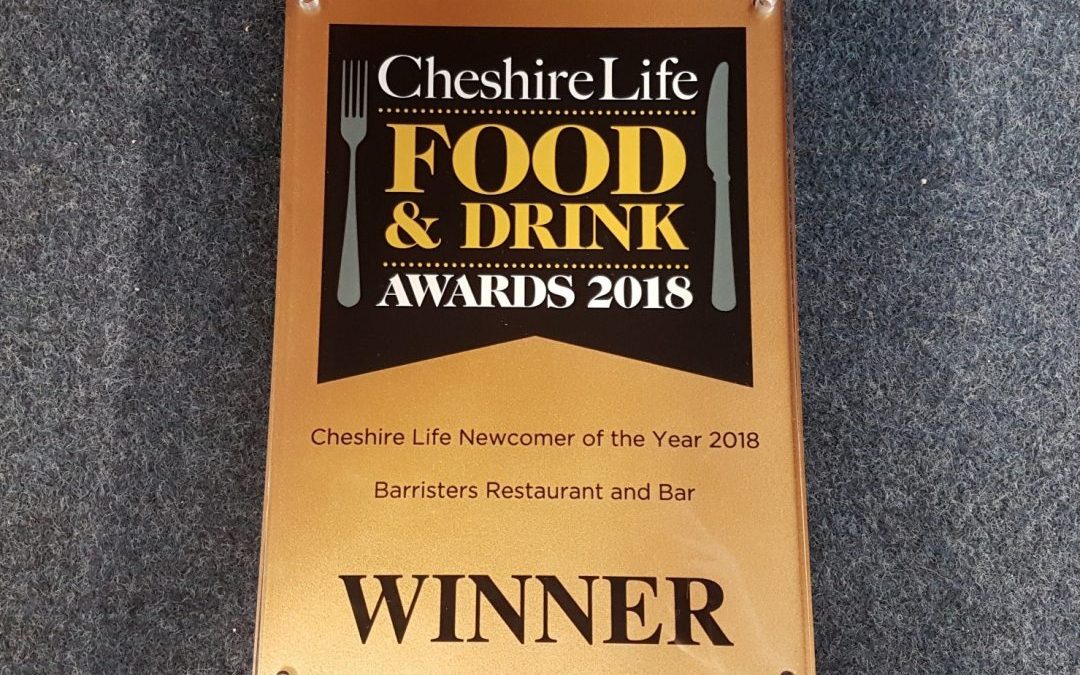 The Perception team are celebrating today as our client, Barristers Bar and Restaurant at The Courthouse in Knutsford has been crowned Newcomer of the Year at the Cheshire Life Food and Drink Awards 2018.

The restaurant, which opened last year in the former home of Knutsford Crown Court, fought off stiff competition from Fisk in Prestbury and The Tapas Kitchen in West Kirby to scoop the prestigious award, which was sponsored by Hallgarten Druitt & Novum Wines.

The Courthouse is a magnificent Georgian Grade II listed building, designed by George Moneypenny and built in 1818. The iconic property has been transformed by local hotel group, Flat Cap Hotels, into one of Cheshire’s most stylish events spaces.

Co-founder, Dominic Heywood, picked up the award at the glittering black tie ceremony at Carden Park on Monday 16 July. He said: “I am absolutely thrilled to receive this award from Cheshire Life. We have been overwhelmed by the success of Barristers Bar and Restaurant and I would like to thank our dedicated and extremely hardworking team for making it such a resounding success in its first year of business.”

Eleven signature hotel rooms are soon to launch in the East and West wings of the building, with another 40 due by 2020. In what is proving to be an exciting time for the venue, which celebrates its 200th anniversary this summer, the eagerly-anticipated Rooftop Gardens will open to the public on 28 July. A stylish champagne cocktail bar serving small seasonal plates, afternoon tea, drinks and coffees, the Insta-worthy Rooftop Gardens are situated on the roof of the stunning property and boast unrivalled views.

The Courthouse is part of Flat Cap Hotels, a family run hotel group, founded by brothers Oliver and Dominic Heywood in 2015. The Courthouse is located in Knutsford, Cheshire and launched in June 2017. The property opened with Barristers Restaurant and Bar serving inventive dining, creative cocktails and afternoon tea.

The Rooftop Gardens a Champagne Bar serving British seasonal plates launches on 28th July 2018. Eleven bedrooms are due to launch in summer 2018, with an additional 40 bedrooms to be added at the rear of the building by 2020.

Ten minutes from Knutsford is the group’s sister property; The Vicarage Freehouse & Rooms. A 26 bedroom countryside hotel, pub and restaurant at Holmes Chapel. Opened in 2015 and recently included in the Times & Sunday Times “Top 30 best pubs to visit this summer”.