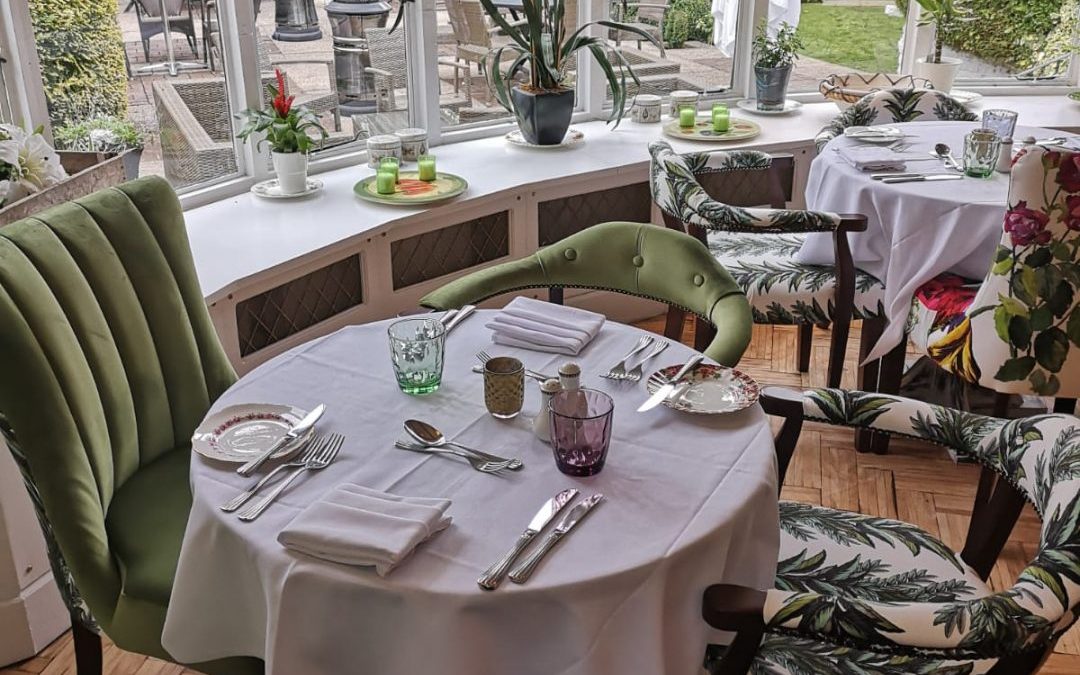 Cheshire-based hotel group, Flat Cap Hotels, has revealed the new bar and restaurant at The Bridge in Prestbury. This is the third property to be launched by the group.

Following the successful refurbishment of The Vicarage in Holmes Chapel, and The Courthouse in Knutsford, Flat Cap Hotels embarked upon restoring the historic property to its former glory and reinstating it back into the community.

The grade II listed building has been lovingly restored, with a host of original features uncovered during the refurbishment including stone and parquet flooring and wooden beams throughout.

The first phase of the relaunch which has taken three months, includes a new bar and restaurant, a Garden Room, along with a new-look lobby and reception area.

The lobby has been opened up to create more space for guests to enjoy teas and coffees. Heritage colours of red ochre have been used to create a cosy welcome for guests and there are large Chesterfield sofas and oversized vibrant coloured armchairs for the weary traveller.

The restaurant has taken inspiration from the beautiful gardens at the rear of the hotel, which overlook the Rover Bollin. The restaurant décor includes jewel-toned chairs in peacock blue and emerald green, plus a bright, light-filled Garden Room facing the terraced gardens with botanical print chairs and parquet flooring.

The new bar has been renovated in soft tones of green, with a feature wall of mirrors and the original beams have been exposed during the renovations.

Oliver Heywood, co-founder of Flat Cap Hotels commented, “We always knew that The Bridge was a special hotel. It’s at the heart of the village and The Bridge holds special memories for many local people who’ve held weddings and birthdays at the hotel over the years. We wanted to uncover the heritage of the building and at the same time invest in the hotel’s future. We’re excited to be unveiling the first phase of the investment and look forward to the local people having happy memories of The Bridge for many years to come.”

The restaurant is open from 7am to 11pm Monday to Thursday, Friday and Saturday from 8am to midnight and from 8am to 10pm on Sundays. Afternoon tea is served in the Garden Room daily from 12 to 5pm.

Over the coming months, the 23 bedrooms will be completely transformed with a fresh new look echoing the Flat Cap style.
The Bridge is located next door to the historic St. Peter’s Church in Prestbury, making it the perfect choice for local weddings.
The Whiteside Suite can accommodate up to 150 people for a wedding or private party and drinks receptions can be held in the gardens.

Nestled in the heart of Cheshire, The Bridge is easily accessible by car, just 30 minutes from Junction 19 of the M6 motorway and 25 minutes from Manchester Airport. The hotel is located within a five minute walk from Prestbury train station, which has direct links to Manchester.

Flat Cap Hotels is a third-generation family-run hotel group, founded in 2015 by brothers Dominic and Oliver Heywood. The group launched The Vicarage in Holmes Chapel in 2015; the first property in its portfolio, followed by The Courthouse in Knutsford in June 2017.

Notes to Editors:
Flat Cap Hotels is a family run Cheshire-based hotel group, founded by brothers Oliver and Dominic Heywood in 2015. The portfolio includes The Vicarage in Holmes Chapel which launched in 2015, The Courthouse in Knutsford which launched in June 2017. The Bridge is the third hotel in the group.
All hotels are food-led destinations and have historical significance with a strong heritage. The Vicarage was a derelict building before being transformed and relaunched. The Courthouse was the original Sessions House, former crown court in Knutsford.
Food is predominantly locally sourced within 50 miles. The kitchen teams are headed up by Steven Tuke, executive chef for the group.