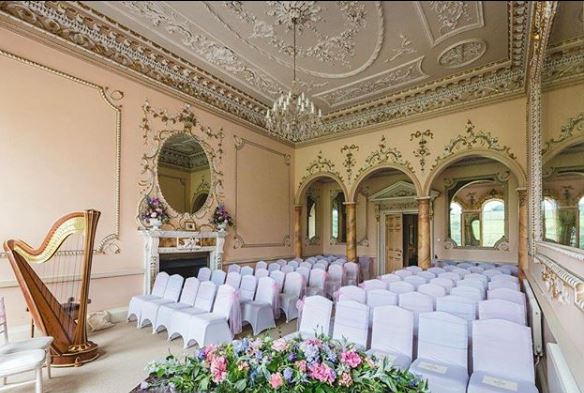 The Welsh Wedding Awards shortlist has been announced and Nanteos Mansion has been included for two awards.

In addition to the Central Region’s hotly contested Wedding Venue of the Year category, the elegant country house hotel is also up for Wedding Co-ordinator of the Year.

Couples can tie the knot in the Georgian mansion’s stunning Music Room, which is lavishly decorated with large mirrored walls, gold leaf mouldings and an Italian Aesop’s Fable fireplace depicting the four seasons. The property can also be hired for exclusive-use weddings.

Renowned for its glorious setting, Nanteos is one of just six properties shortlisted for the Wedding Venue of the Year award and one of ten in the Wedding Co-ordinator of the Year category.

Now in its second year, the Welsh Wedding Awards recognise and celebrate the industry’s best professionals. Voted for by the public via social media, the results will be announced at a glitzy black-tie ceremony on Wednesday 20 February at The Exchange Hotel in Cardiff.

Alaa Kahill, who has been recently appointed as general manager at Nanteos commented: “We are absolutely thrilled to be shortlisted in not one but two award categories. We pride ourselves on being one of the area’s most unique wedding venues and can’t wait to find out if we have won.”

Nanteos is a country house that happens to be a hotel. The building sits on the site of a house that dated back to 11th century, which can still be found with front door and windows still intact, in the cellars below the house. The flooring dates back to the 11th century with flagstones worn from the steps of previous inhabitants.

The building of Nanteos as it is now known, began in 1739 under the direction of Thomas Powell, MP for Cardiganshire, funded by the wealth of his wife Mary Frederick, granddaughter of Sir John Frederick, Lord Mayor of London. In its heyday the estate covered 33,000 acres.

Now covering 30 acres, Nanteos can be booked for exclusive use weddings and private parties. The property is dog-friendly and there are a number of pet friendly rooms, located around the courtyard.

The Grade II listed Stables is now the Mews House, a self-catering property.

Formally a Palladian Carriage house, the Mews House is situated across a small courtyard from the main hotel. It is fully equipped for self-catering purposes, and opens out onto a private courtyard. There are four luxury double bedrooms all with king size beds, one en-suite bathroom, and two separate bathrooms. The living area comprises of a spacious sitting area with CD / DVD player, flat screen TV, WiFi and dining table. The kitchen dining table can sit up to 10, and has its very own luxury fireplace.